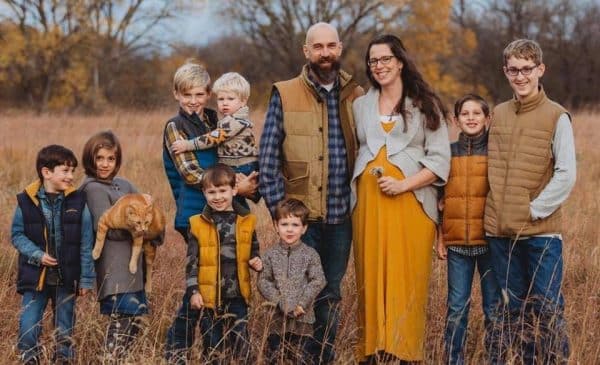 Do you ever feel like no one close to you “gets” how hard it is to study for the CPA Exam?

Have you ever dreaded telling a boss/spouse/father/nosy co-worker that you failed yet again?

Are you sick and tired of the CPA Exam and ready to either pass this thing or quit?

If you answered “YES” to any of these, then My Story may resonate with you.

My name is Jeff Elliott and I am married with nine children.

(Yes – we get weird looks in restaurants – and Wal-Mart).

I passed the CPA Exam when I was 30 and had three kids at home at the time:

Two kids under the age of 5 and a newborn baby.

Whatever your circumstances, I can probably identify with them.

I began my long (too long) journey toward the CPA designation in late 2005.

I wanted to be a CPA, but I didn't really want to be a CPA enough to study like I needed to.

I wasn't fully committed to studying (who wants to go home and study after a full day of public accounting?) and I would try to “cram” for 2 weeks prior to my exam, and was coming up short.

Maybe you can relate?

Everything changed, however in February 2008.

I said “enough is enough” and created a new approach, which I would later dub “N.I.N.J.A.”. Then I passed all four sections of the CPA Exam by the end of the year – each exam on my next attempt.

In 2008, I was a desperate CPA Candidate on the verge of throwing in the towel.

(By the way, did you catch that I scored back-to-back 74s on REG? It was brutal. It also cost me my FAR credit.)

Today, I am a Licensed CPA (KS) and an active member of the American Institute of Certified Public Accountants (AICPA).

If you're struggling with the CPA Exam, this site is for you.

Right now, you might find yourself in similar shoes – a desperate CPA Candidate on the verge of throwing in the towel.

There was hope for me, and there's certainly hope for you.

Just stick with it, follow my NINJA Study Plan (it's free), and you'll be adding those three letters after your name faster than you can say “HIYA.”

If you're already finding success with the CPA Exam, this site is still for you.

Maybe you find yourself in the enviable territory of kicking butt and taking names on the CPA Exam. This site is for you as well. You're firmly on the path to passing, and I can help you get there a little faster and you can taste freedom a little earlier. Imagine extra months of doing whatever you want instead of having to study.

Education: Undergraduate degree in Accounting from Kansas State University and some graduate classes (for my 150 hours).

Work Experience: I've been in the accounting profession since 2001 and have worked in public accounting (two tax seasons were enough for me), private accounting, as well as in industry for two public SEC Registrants.

Licenses: Certified Public Accountant (CPA) in the State of Kansas since 2009

Back in 2008, when I was sick and tired of being sick and tired, I started a blog. This was pre-social media, so some of the blog posts had 3,000+ comments.

In 2009, we added the CPA Exam Forum, which has well over 500,000 posts to date. It's actually closer to twice that probably because we lost a bunch when we upgraded the software, but we'll call it good at half a million. 🙂

Fun Fact: Another71 is the Most-Visited CPA Exam-related site on the Internet (a stat that still shocks me!)

In 2014, we added NINJA Book & NINJA MCQ to our study package, making NINJA a Complete CPA Review Course, and putting an end to the notion that you need to spend thousands in order to Pass the CPA Exam.

In 2016, we purchased Bisk CPA Review from Thomson Reuters and have big plans for those materials in the future as well.

In 2018, we disrupted the CPA Review industry yet again with our NINJA Monthly plan.

Thank you for visiting Another71.com and reading My Story!

As you can see, God/Jesus has blessed me immensely.

I wish the same blessings for you and your family as you pursue the CPA designation and your career.

To Your CPA Exam Success,