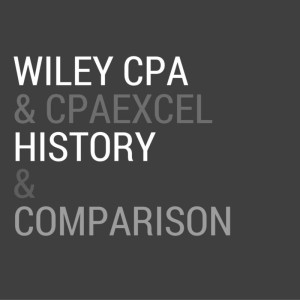 Wiley CPA is one of the oldest providers of CPA Exam study materials. Charles Wiley got his start in business in 1807 when he opened a print shop in lower Manhattan at the age of 25. He initially printed titles for other publishers but eventually added finance and distribution services to his clients and became a full-fledged publisher. Charles died in 1826 and his son John took over the business. John expanded the company’s products to include practical and professional topics. The company did very well during the industrial revolution due to the wealth of opportunity in science and technology. World War II and the post-war boom were profitable for the company. John’s great grandson, William Bradford Wiley took over management of the company in 1956. By 1961, Wiley was the fourth-largest publishing house in the United States. The company went public in 1961 and over the course of the next decade, expanded to include offices in London, Australia, India, and Canada. By the 1980s, Wiley had sales offices in every continent. Acquisitions throughout the 1980s and 1990s allowed Wiley to continue to expand into business education and training and college textbooks. In 2012 the Wiley publishing company purchased Efficient Learning Systems, Inc. provider of CPAExcel, one of the most widely used CPA Exam review courses in the U.S. Wiley had previously published CPA Exam review course books, but the merger allowed Wiley CPA to offer a fully-integrated CPA Exam test prep course. Under Wiley, CPAexcel made several changes. The budget for producing lecture videos expanded and additional topics were added to their bite-sized learning segments. The original Wiley CPA books are now known as the study guides, part of the complete Wiley CPAexcel review course. While Wiley CPA does offer its books for purchase separately from the CPAexcel course, there are several value-added tools that are offered only in the complete CPAexcel course: The CPAexcel courses have no expiration date and can be used until one year after passing the exam. Course repeats, online content updates, and software upgrades are free. Wiley CPA offers an online test bank of 4,400+ practice questions and 150+ simulations. With the CPAexcel Online Test Bank, candidates have access to an additional set of 5,500 multiple choice questions and an additional 450+ task-based simulations.

Wiley CPA’s Self-Study Pack is geared more towards candidates concerned about budget and who prefer self-study to video lectures. The self-study option provides access to the test bank for one year and after that it will need to be repurchased. For candidates who prefer to watch videos via a computer monitor to the textbook, the CPAexcel review course provides more support and unlimited access until you pass the exam.