Tyler is a weekly blogger as he documents his journey through the CPA Exam. He is currently a graduate student at the Fisher College of Business at the Ohio State University.

What an amazing feeling! I just took BEC this past Saturday and finally have a break from studying for the CPA exam, and I have to say, its even better than I expected!

I no longer have to use the constant excuse sorry, I have to study for the CPA exam to destroy my social life! In regards to the actual test, I would not quite say that I felt 100% solid on all of my answers. BEC was definitely a mixed bag of a little of everything that I had studied for the past few weeks, so Im not sure how much more studying could have helped.

Lets just put it this way  I felt I studied just enough to feel prepared for the test; not great, not terrible, just prepared. And for anyone wondering, Id say in total I must have spent somewhere around 50-75 hours studying for BEC.

If I had to re-study down the road, I would probably re-think my attitude slightly. As I mentioned last week, going into the test I definitely felt that compared to AUD and FAR, BEC would be a cakewalk. Personally, I do not feel this was the case. I think I recognized enough of the material to at least avoid the dreaded 74, but as with all of these tests, I suppose I wont know until I get my score back.

At least I can rest assured that my score should come a little quicker than my scores for AUD and FAR, since this one was just multiple choice. Ill just have to check in here on Another71.com constantly to see when Jeff has any news on new scores

So for those of you wondering, well whats he going to blog about since hes done with the exam for now? I will actually be doing some retroactive blogging over the next few weeks to share my experiences of studying for both AUD and FAR (since I didnt join this blog until after I had already finished with those sections).

To be fair, I am not yet done with the CPA exam. I will be saving REG for next summer once I have some free time again. (Jeff's note – watch the 18 month window…losing credit for an exam section isn't fun, trust me).

I did not save REG for any particular reason except that I wanted to take the other 3 first. I took AUD very first because, at the time, I had just finished a course entirely focused on Audit, so it made perfect sense. Then I took FAR so that I would not have to deal with the 2011 changes that will be adding the topic of IFRS.

It sounds like this should not be a big deal, but I still just wanted to not worry about it. Then last but not least, I decided to take BEC also to beat the 2011 changes, which for BEC will mean no more just multiple choice questions.

I have to say this was a perfect order for me to take them, but I cant really advise anyone at this point to do the same thing considering theres only a few more months left in 2011, and so anyone taking it after that point will not have the choice to make their decision based on beating the new changes.

Well thats it for now, but Ill leave on a tribute note to the past few months of my life. Here is a pie chart I made for the occasion that depicts how I have spent my free time over the past months while preparing for AUD, FAR, and BEC: 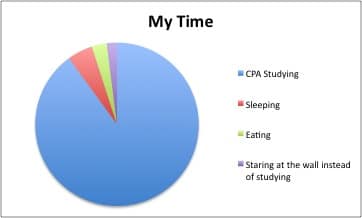 I now plan on filling that large CPA studying slice with a category I once knew called life.

For everyone that is in this boat right now, I wish you the best of luck, and I would like to give you a little spark of hope by just re-emphasizing that when you do make it to the end (or even just a long break like me), it is just as great as everyone says.

Best of luck and hang in there,
Tyler

FAR Exam Complete: The Wait for My Score Begins

Karen is a NINJA CPA Blogger. Hey fellow NINJAs!! It’s been quite a while since my last blog but things have been kind of crazy to say the least. I took my FAR exam on Monday, November 5th. I put in an incredible amount of study time for this exam. I have no clue as […]

Megan is a weekly Another71 Facebook blogger as she documents her journey through the CPA Exam. This week has been incredibly productive. I moved to a new apartment and still managed to fit in some time to study. It helped that I planned ahead and took a half day off of work to visit a […]

Three Sections of Audit Down, Two to Go!

Sherri is a weekly Another71 Facebook blogger as she documents her journey through the CPA Exam. Well, I guess that the best thing that I can say about the Audit Section is that at least its not FARE! Ive been really working to try to get all of the Sections in my Roger CPA Review […]

Kricket is a weekly Club 75 Blogger as she documents her journey through the CPA Exam. She has been a member of Another71.com’s Club 75 since May 2009. Well I started the year out with the best of intentions that have all gone wrong. I was going to focus on my work and studying so […]