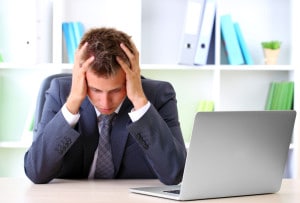 It happened: You failed the CPA Exam.

On the bright side … You're normal.

It happens to one out of every two people who walk into a Prometric Testing Center.

The statistics, however, don't change the fact that it's one of the loneliest feelings in the world, because let's be real:

Your friends and family, while sympathetic and supportive, simply don't get it.

Right now is a miserable time and it is easy to start believing thoughts that simply are not true.

Thoughts like you're not smart enough to pass, accounting isn't for you, the AICPA hates you and does not want you in the profession, etc.

I personally felt all those emotions and had those thoughts going through my head as well. A few years removed from the exam process, I can tell you that being on the other side truly is worth it.

My problem was always a commitment to the exam. I wanted to be a CPA, but I didn't really want to be a CPA. (I had better things to do after a long day of public accounting like play Madden.)

Picture yourself three years from now.

No. It will be a distant memory and like most things, you look back at tough times with a fondness that wasn't there when you were in the middle of it.

This very well could be one of the toughest times you encounter in your career outside of getting downsized or laid off.

It will pay off in the end. Just the sheer fact that you got this far tells me you are more than smart enough to pass this exam.

Get up and dust yourself off. You're tough. You'll be fine. Anyone can quit this thing. Quitting is simply not an option for you. It just isn't.

They work through it. They pass.

Are you 4 points away? No. There is a significant hole in your conceptual understanding of a few topics. You know what they are if you're honest with yourself. They are those sections of your exam that you pray you don't see on Exam Day.

Start your study prep over and don't cut any corners whatsoever.

Many people start looking for information on how to appeal an exam score when they score a 74 (or even a 73). Forget it.

You could take another exam and get your score back by the time you get your appeal results.

Let's face it: there is a next-to-nothing chance the AICPA is going to overturn your score.

I've certainly never heard of it happening, and if it did happen, I would have heard about it in the Another71 Forum.

As you re-study, remember this:

You're not one “point” from passing.

You scored that 74 more than a month ago.

Start over and hit it hard. Figure out what your weak area is and own it.

As the late Zig Ziglar said, “Remember that failure is an event, not a person.”

Final point: If you fail an exam, aside from a spouse or loved one, it's no one else's business unless you decide to make it their business.

(I have an attorney friend who says that a lot and I like it.)

You lost an exam credit:

Losing credit for a passed exam is terrible. I know this first hand.

I was so elated over passing FAR that I literally took a year off from the exam to celebrate.

Not a smart move.

After I started rolling and passed BEC and AUD, I came to my nemesis: Regulation.

I had previously scored a 74 on REG and I was back for vengeance. My FAR credit was also on the line.

Pass REG and I was done with the CPA Exam.

Fail REG and I was back to having passed only two sections.

I fired up my laptop.

I stared in disbelief. I wanted to throw my computer across the room.

Not just across the room – I wanted to throw it through the wall.

Is this a mistake?

It wasn't a mistake. I missed the mark.

It took me several days, but I eventually owned my failure.

I pretended like I didn't have to pass FAR again because I dreaded re-studying for that thing so much.

Given a choice between being waterboarded and taking FAR, I would have taken the former.

I hated FAR. I blocked it out of my mind.

I realized a harsh truth about failing REG: I was failing because there were a few areas that I flat-out refused to study.

I forced myself to study them and re-studied everything else again.

I also re-passed FAR on my next attempt.

If you lost an exam credit, it only seems like it's the end of the world.

Mentally, you have to take inventory of what exams you've passed, not what you just lost.

You lost credit for one, but you still have two exams passed.

A lot of people would give their left pinky to be in your shoes.

If you just failed an exam, it's no one's fault except your own.

I don't care what happened at the exam center that day.

I don't care how crazy work got the week prior to your exam.

I don't care how insane the simulation topics were.

Be accountable. There are no bailouts.

If you fail … Study harder.

If you fail again … Study even harder.

Need help with the CPA Exam?

Message me via Ask Jeff.

Disclosure: We may be compensated if you purchase through one of our links.

Can I send you $162.12 of Free CPA Review Materials that will help you…