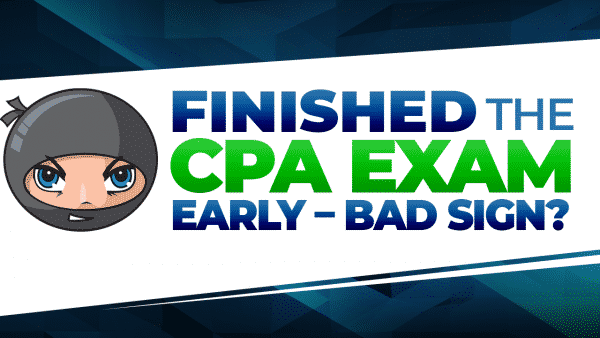 Junior says, I just completed auditing. I finished the exam so fast, I'm wondering if I made errors. I just started regulation and it seems like so much information to go through in 8 weeks. Okay, if there's, so if you told me that you finished one exam early and you went through it faster than you anticipated, I woulda said, hands down, you took auditing. So I'm a very slow test taker on exam day. I tend to just sit there and stare at questions just praying that they're right. And so, I'm a slow test taker and I finished auditing in like 30 minutes to an hour early. I was shocked. Now, I was someone who, the exam logged me out every time. I'd be finishing the final sim and it was like oh. Thanks for coming! And so I wouldn't, if you finished auditing early, don't read too much into that. It means you're pretty normal actually. And regulation being a lot of information in 8 weeks, it is because it's basically two exams in one. It's tax and business law and ethics. And it's kinda hard tax, you know, corporate tax and stuff. It's not hard like enrolled agent hard, but it's still hard. A lot of people focus on the tax and then one week out from their exam they're like, Oh yeah, I have agency law to study. Don't do that, that's a recipe for a 65. Make sure that you just follow the plan. Get the ninja study planner and you'll be fine. And the ninja study planner actually has a map for regulation in five weeks which is pretty aggressive. But, eight weeks, you'll be good to go.