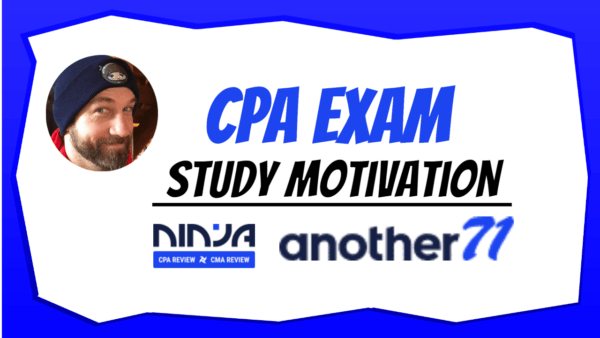 Amy writes in. Okay. I'm back. I failed. I failed with a 73 and a 71. I really am frustrated. I'm not sure how to get myself over the hump. I'm doing all the sections. I feel like I just want this weight off my shoulders getting it done. So when people ask, if I'm a CPA, I can finally not feel like a loser. I can say yes, it's really just a personal goal.

If it's just because you, don't want to feel like the ACPA has defeated you or it's always going to bother you just because you didn't do it. Or because someone told you that you weren't smart enough to do it, or just because people are just in general and just don't expect it to happen.

They expect you to always be a bookkeeper. So these are all real things. And I, personally, want to be a CPA just because we'll start it out. Why did I get my accounting degree? It's because want my grandfather to be proud of. So he was an accountant. He wasn't proud of me anyway, but I want to be, I want to be just like him.

He was an accountant back in the day, CFO during he went to got his accounting degree during, the depression. I wanted to make him proud. And so why do I want to be a CPA? Part of it was because I wanted him to be proud. And so like that's why when I had to call him and tell him I had failed, it sucked really bad.

That was the worst part of it besides telling my wife, sorry, honey. Another four to six weeks, eight weeks of you watching the kids while I study on a Saturday, that was probably actually worse. But and why do I want to be a CPA? Also, like I had this uncle who has a CPA, I wanted to prove him wrong.

So that's how you get over the hump. 73 71, he gets back to the 75. You can always answer the tech, the question tactically, but psychologically the psychological part is actually probably even more important because before you can even get to the, how do you do it? You need to answer the why. Hope that's helpful.

Get Your Free CPA Notes