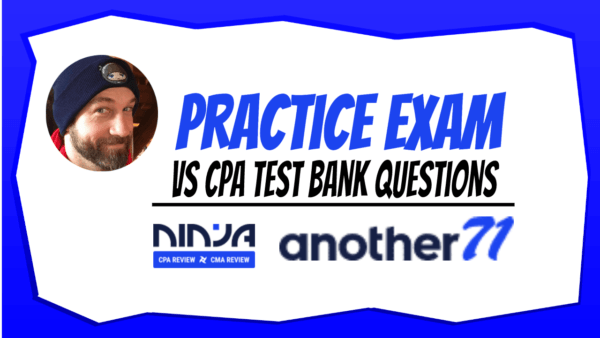 Kendall writes, “I'm taking my last CPA Exam (FAR) in one month. Do you recommend doing any CPA practice exams or should I only do practice sets of CPA Test Bank Questions?” I've said it many times before. And some people think it's stupid advice. Not the first time. I hate practice exams. Friends don't let friends do practice exams.

I'm a bit of a hypocrite because NINJA MCQ has unlimited practice exams, but I only include those because people would want it and ask why it's not included. I personally do not like practice exams because it's, not an effective, nor is it an efficient use of your study time? It's not effective because I don't think it tells you anything.

It tells you your, raw percentage score. That's not how the CPA exam is graded anyway, and it's not efficient because the CPA Exam is it's a complicated formula it's of weighted average and I think they, they hide these actual formula in the same vault as the as the Coca-Cola recipe and the KFC recipe, and so highly, guarded secret, but it's basically a weighted average.

And it's a lot more complex than that. So you can't just get a raw percentage and then attribute that to, or correlate that with a. Your, how are you going to do it on the exam? And also it's inefficient because if you were going to spend four hours of study time, you're a lot better off just doing that in study mode.