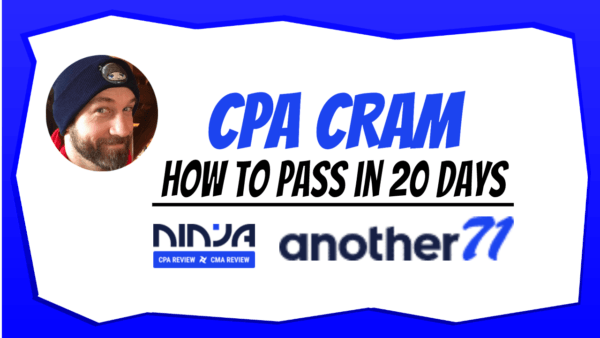 Question. What is your best recommendation to study for the CPA Exam in 20 days? Review ninja notes and do two final exam rehearsals? Yeah. So go to another71.com and we have How to pass any CPA exam section in 20 days. It's actually how I passed auditing in 20 days. And the high-level breakdown of it is you're essentially skipping the nail the concepts.

So your nonstop MCQ becomes your nail, the concepts, ultimately I think you can study for any exam section this way. You'll find a lot of people out there who say that they pass just by doing multiple-choice questions. So now the concepts via your MCQ and then take notes and then spend three days.

So if you're doing a full seven-week study plan, then you would rewrite it for a week, but under this condensed schedule, it's for three days. And then do your final review. And then the question about “Do you do practice exams or exam rehearsals?”

No. Never, or unless you really want to, but I, hate practice exams.

I don't think they're an efficient or effective use of your time. I don't think that you, spent four hours on it. I don't think you know, any more than you did about yourself. Four hours later, other than you could have false encouragement, you scored 90%. Great. Does that translate to a real CPA exam score?

Chances are you're, doing well, but with a 55. That could cause you to be disheartened and you want to quit. Probably the most important time during the entire exam prep is like that final week. So if you are just moody and don't want to study, because you scored so poorly on your practice exam.

You'll turn what was going to be a successful exam endeavor into a fail on the test.