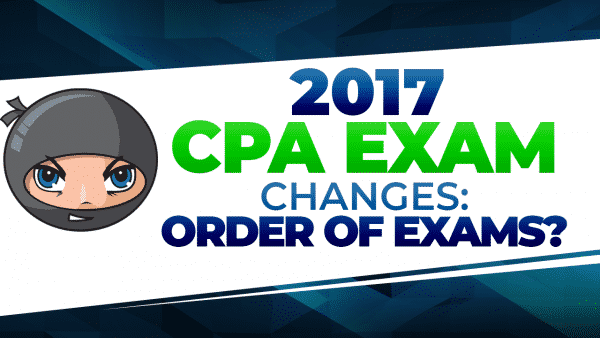 However, in light of the 2017 CPA exam changes. If you are still going to be taking exams or you expect to reasonably be taking the exams as of April 2017 then you do it in this order.

Here's why. BEC is dropping from 72 questions to 62 questions.

That's a good thing. They still have three written communication questions. Just like now. However, BEC is getting four to five simulations, which will account for 35% of your grade. That's not necessarily a bad thing, but that's a bad thing.

Knock BEC out first. Then regulation. The reason for that is, regulation is getting a few more questions but they're going for seven sims to eight or nine sims.

Not as big of change. Auditing is getting less questions.

Normally I advocate putting FAR off or taking FAR first so that you knock the beast out of the way for your 18-month clock. In light of 2017 CPA Exam changes, take FAR last.

If you're starting fresh in 2017 or as of April 2017, then it goes back to FAR, auditing and regulation, BEC because it doesn't matter. To recap, take BEC first, take FAR last. If you're starting now and still have FAR to take.