If you can run a marathon you can do ANYTHING. Does anything include the CPA exam too?

I truly hope so because I've done 2 full marathons, 11 half marathons, and I coach long distance runners 3 times a week. I love running and the discipline it requires but so far the CPA exam has been harder than any race or any training day I've ever had.

I guess I should start over.

My name is Alex and I graduated from college in 2011 with a Masters of Accounting, quickly after that I started at one of the Big 4 accounting firms, with all hopes of passing my CPA exam the first year and getting that sweet bonus, but unfortunately life happened.

After leaving Big 4 to go to a smaller firm and hopefully a better quality of life, I again decided to pursue the exam but again life happened and after a breakup and a new city, well, I lost my CPA luster. I just worked and worked and forgot about that stupid exam.

About a year and a half ago I decided public accounting was no longer for me and that's when the CPA came back up. I mean of course I had heard about it at performance reviews or when talking to new hires about their own CPA aspirations.

However, doing a job search in one of the largest cities in the country, I feel like the first question or assumption was — so you're a CPA, right?

I had to say no and when they asked why not, I didn't have a good enough answer. I just didn't have it. Well I somehow still got a good job with the actual work life balance I was looking for, and after a year learning my current position I decided to go after it once again.

So here I am, a good 6 years out of college trying to tackle this monster for the final time. I took Audit in April and then a couple months off to move apartments and try to balance life again. I'm back, starting on FAR and anxiously awaiting my audit results.

With the faith of my friends, and family, and cat son Evan Apollo I'm sure I'll get this thing done.

Finding Study Time for the CPA Exam, Even on Vacation »

How to Add NINJA To Becker CPA Review

How to Pass the CPA Exam in 20 Days 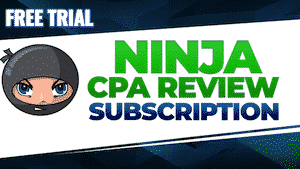