The admiral and I are killing time at Sea-Tac Airport, waiting on a flight to Vegas where we will spend the next couple of days.

I went home for lunch last Friday and received notice from Jeff that scores had been posted for the third wave of the testing window. I always forget where to check scores, so I googled and was lead to the website.

That's when my wireless hot spot decided to shut down, denying connectivity…. I think it has a bad connection, which drains the battery. Windows 8 makes the most annoying twangy guitar plucking sound when the connection is broken. On, off, on, off.

There's no way I'm going back to work without my score. I try wiggling the usb cable. On, off, on, off. No internet. I pushed the cable as hard as I could into the hot spot to get a connection and it powers back up.

I'm prompted for my section code. Where did I put that? It's on my NTS which is somewhere in my email. So I log into Hotmail with one hand whilst shoving the usb cable into the hot spot with the other. I got the launch code and enter it in, along with my birth date.

“Yes!” I said. This reaction was more celebratory than the last two scores, which were more a matter of disbelief. This takes a lot of pressure off. I now have two windows left to pass Reg, and I'll be done.

I started studying Reg but it literally put me to sleep. A couple of major projects are distracting me. We bought a new boat, a 37-foot power boat that will become our next home.

I'm building a dinette that we can use for dinners, movies, and studying. I'm also putting a new floor in. I'm also in the middle of an accounting software conversion at my church. Their financials are so out of balance, they're of little use.

So I had to go back and re-construct their balance sheet as of 12.31 using bank statements and whatever else I could find. I developed a completely new chart of accounts for them that bears no resemblance to their current COA, which is out of date and much too detailed.

Now, I'm re-posting all of the journal entries for 2013 into an excel spreadsheet, re-coding each entry for the new accounts and centers. I just completed January. Once I'm caught up and everything balances, I plan to upload the entire transaction journal into the new system.

It's been a pleasant distraction from my studies – cool in a geeky accounting kind of way. I'm pretty happy with the results so far though.

Hopefully next time I write, I'll have logged a few study hours. I'm really stumped on how to tackle Reg.

The attached photo is of me inside our new boat, “Tank”. I'm standing between twin 327 Volvo V8 engines, which sit directly below the living room. We're going to keep our sailboat for cruising, and use the power boat as a house boat. 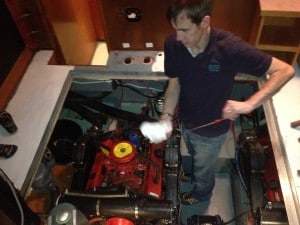