Last time I wrote, we were about to leave for our Summer Cruise, worrying about our outboard, and awaiting my REG score.

Well, I'm happy to say, the motor performed flawlessly and got us to Port Townsend on less than seven gallons of gas. We motored from Olympia to Kingston the first day and then on to PT, fighting headwinds the whole way.

We spotted Orcas off the northern tip of the Kitsap Peninsula, but we fought the urge to take photos, because of the distance between us and them.

Port Townsend is a cool old town with old brick buildings and many Victorian era houses. Officer and a Gentleman was filmed there, and also at nearby Fort Worden. In the boating community, it is a sort of Mecca for wooden boats, complete with a wooden boat building school.

As a kid, I remember eating ice cream and waiting for the Ferry to Whidbey Island. To an adult, ferry rides are for catching naps to and from work. To me, we were sailing for a new continent and the smell of creosote soaked piers and salt water always brings me back to that day in my childhood.

We anchored a few days and spent a few days at the city dock. I worked mostly from the library and a small convenience store in town….. I think it was called Penny Saver – the last known redneck stronghold within the county where people talk about lawnmowers and lament over Prius owners and those who would change the name of the Washington Redskins.

We are now in Friday Harbor, on San Juan Island, the largest and of the San Juan Archipelago. We arrived on Saturday after crossing the Straight of Juan de Fuca which connects the Pacific Ocean to the Puget Sound. It's about 30 miles wide and 100 miles long from West to East.

Waves can get very ferocious here, especially when the tide is going out and the wind comes in from the west. We left at about five in the morning and were treated to clear skies and glassy sea most of the way. I was tempted to hoist the sails but didn't want to spend any more time out there than necessary.

The scenery was awe inspiring. To the West, nothing but sea. To the East, the Cascades and Mount Baker. To the South, the Olympics and Mount Rainier. All this, and a nice cup of coffee.

Midway between PT and the San Juans is a tiny island about half the size of a city block with a spit that extends to the East. There is a small house on the island and probably a weather station, lighthouse, and repeater. The photo is of the spit, which looks very apocalyptic when you're surrounded by so much water. 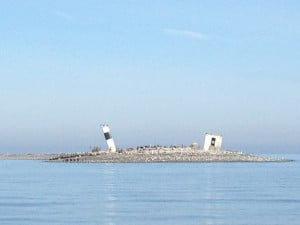 I was very disappointed but not surprised at my score of 66 on the REG exam. This is such an amazing trip and it would be so much better if it weren't tainted by the need to study. I think it's the freedom of this burden, more than the credential that I crave at this point.

I'm committed to family this summer, and unfortunately, that means more balancing. I have until August 17th to pass, or I lose my FAR credit. I've read it often on this site: I don't need 9 more points – I need 75 more points. I plan to spend an hour in the morning and an hour in the evening each day, working problems, refining notes, and memorizing the crap out of them.