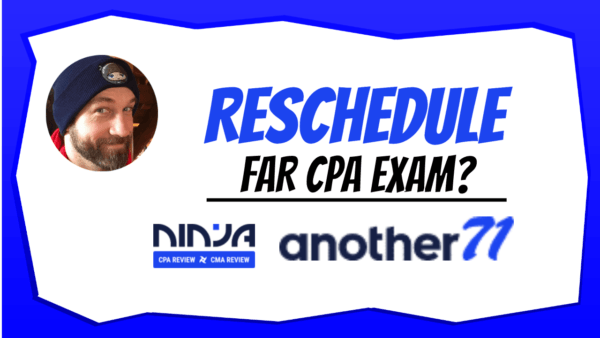 Back to the chat. Yvette says, I bought the Surgent CPA Review last year and I was afraid to take the test. I finally took it last June. So last year you got a 56. I have two kids and a full-time job and a part-time remote two days per week. It's hard to keep up in this study and mode. And I rescheduled my retake for far on September 2nd.

I'm just starting to study. I don't know where to start. Everything seems difficult for me. So where do we stand right now on August 11th? So your far exam is in less than a month and full-time job two kids two days a week. You're either away or. Another part-time job. I'm not quite understanding that you're busy.

Now if you can't get 25 hours a weekend, even during four, if you can get 80 hours and for far, and it's just like intense 80 hours, it's four weeks, you cram it all in, go barf it out on exam day. I'm okay with that. It's not ideal, that's just life and the CPA exam. So obviously follow the ninja framework, the concepts.

And the reason why you switch is because. If you face any questions, a bunch of times with another provider, it's a good idea to get just another look at things. And I think that's always helpful people. You can start to memorize questions and cheat. So now the concepts. Yeah. So both Surgent, and then I think you could clarify, and the other concepts, Surgent, intense notes, Surgent nonstop, MCQ.

With your NINJA MCQ, take notes of your gems of cute. Now, this is so now the content, the other concepts with Surgent, this is like a week, that's it. And then you shut it off and you move into ninja. MCQ is 10 days, that's it. And then you need to start your final review. And so it's great. If you can take notes of your ninja MCQ, but if you're like two days into your week and you're still just taking too many notes.

Stop taking notes, then you just need to go. Or be more selective as you, how you take notes. Like you don't have to write one piece, you can kind of bullet point it a little bit more. That's what I would do. And then obviously you can rewrite your notes. If you have time, it's a luxury it's effective, but it really is a luxury.

And one of the three days doing that, and then you start your final review, the weakest topic. 20 question mini testlets and work backward. Okay. That was so that yeah, four weeks you can do it. It's not going to be fun and life is going to get in the way. And you're just going to have to decide that when you're parenting your parenting, like at the same time, same thing for me with working, like if I'm trying to answer emails or whatever, during like family time.